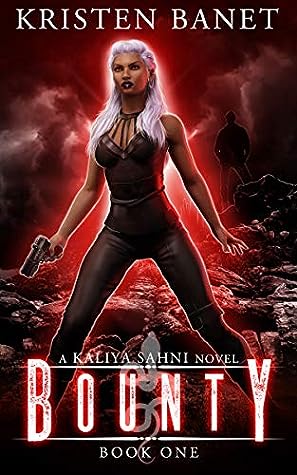 Returning home from attending the trial of Jacky Leon (Oath Sworn) Kaliya, one of the last nagini, stumbles into a job searching for a human on the run. She is doing it as a favour for a friend, but then Sinclair a cold blooded vampire killer joins the hunt things get personal.

Raphael has been on the run for 5 years. Moving from town to town, working for cash in hand, always staying just ahead of his pursuers. Those who want him will stop at nothing and he has never had an ally, at least not until Kaliya showed up.

Bounty is the first in a new urban fantasy series set in the same world as Jacky Leon. It’s actually a little more dense than most UF. Kaliya is a nagini and that needs a bit of explaining and Raphael is something completely new so more world building. But explanations are left intentionally sparse with the idea that things will gradually be revealed as the series progresses so it’s not too much.

I don’t think it’s for everyone, this series will take a commitment (much more so than Jacky Leon) but for those who are willing to put in the effort it’s well worth it. And if kick ass women who don’t need rescuing are what you want, look no further.

A review copy of this book was provided to me by the author.
Join 83 other subscribers