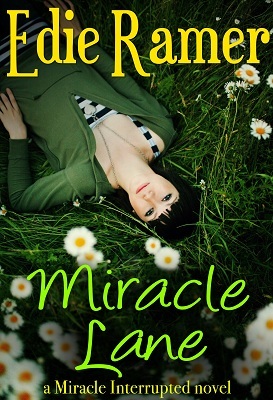 After being run over by a car Nia has been left with no memories of her life before. All she knows is everyone in her family despises her and one of them tried to kill her. Her only ally is Bast, a talking cat who is determined to guard her come what may.

Returning from Afghanistan with his own ghosts, Rob the identical twin brother of the local cop, shows up at her house after she calls about an intruder. After failing his comrades in Afghanistan, he is determined to save Nia from whoever it is that wants her dead.

I don’t quite know where to put Miracle Lane. It’s contemporary romance, romantic suspense, there is a bit of the paranormal going on and it reads like a fairytale.  The writing style is conventional, perhaps a little whimsical, but the thing that really hit me from the very first chapter, that sets this book apart, is the concept. It really is wonderfully odd. While I was reading Miracle Lane I kept thinking of that old Jimmy Stewart film Harvey (where Jimmy Stewart has an imaginary friend who might be a six foot tall rabbit), and a Japanese cartoon from about 20 years ago called Kiki’s Delivery Service.  It’s probably the first time those two movies have been mentioned in the same sentence.

Great fun, but there is an almost oppressive undercurrent to this book.

Many thanks to Blue Walrus Books and Netgalley for providing me with this ARC.