Kaitlyn has spent her life hiding in closets and generally being invisible. And the one person she is hiding from more than any other is Martin Sandeke, her lab partner.  He has a reputation as a love ’em and leave ’em kind of guy. Someone who breaks a woman’s heart and leaves her in tears.

After one of her closet excursions she overhears two students plotting against Martin. Disgusted with what they are planning she sets about saving him from their scheme.  But it seems that in saving him she has inadvertently come to his notice.

Elements of Chemistry is a three book series that to be honest is a single book in three acts. It has all the things you expect in New Adult novels –– infatuation, lust, misunderstandings, jealousy, angst –– but those elements aren’t overplayed and the series is better for it.

I do think parts one and two are a little stronger than part three which seemed to drag a little but I’m still more than happy to say this is probably the best New Adult series I’ve read.

Oh…and the answer is Oxytocin if you were wondering. 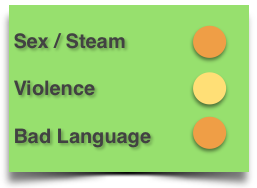 1 thought on “Elements of Chemistry series (by Penny Reid)”