Big Little Lies starts with a school trivia night and a murder. Then we return to the beginning of the school year, four months earlier, to the events that lead to it.

When Jane moves to the quiet beach side suburb of Pirriwee, it’s not just a fresh start for her, it’s the end of her running from the past.  Her son Ziggy is enrolled in kindergarten at Pirriwee Public School and when she meets another kindergarten mother, Madeleine, things seem to be looking up for her.

Then before the day is finished, one of the girls in Ziggy’s class accuses him of bullying her and all at once the promising start evaporates.  Instantly the other kindergarten mothers ostracise her and Ziggy and as the term progresses things only get worse.  The mothers  are suddenly divided into two camps.  The Madeleine camp who are on Jane’s side and the Renata camp who are against her.

As the term progresses clues are given about dark secrets that are hidden behind the closed doors of seemingly happy and perfect families and as the school trivia night approaches we not only find ourselves puzzling out who committed the murder, we are also trying to figure out who was murdered.

I really enjoyed this book.  It’s not perfect, I think the excerpts from police interviews that start each chapter are a little over-done and the conclusion wasn’t as satisfying as I hoped, but the book is overall quite good and those criticisms are really very minor things in what is a unique and entertaining mystery. 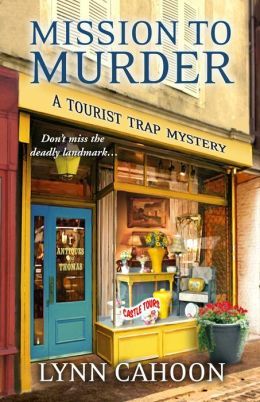 When Jill discovered a significant historical site in her back yard she found herself at odds with Craig Thomas who takes the lions share of the towns funding for that sort of thing. With the possibly corrupt mayor siding with Thomas and evidence suggesting that the site in question was actually somewhere else things aren’t looking good for her getting the funding to preserve the site.

Then Thomas shows up dead and suddenly Jill is a suspect. It’s left to her to investigate and find the real killer before the killer turns his attention to her.

I generally read two or three books a week, but for a couple of weeks I’ve had the flu and that’s slowed me down a fair bit. I’ll literally read a couple of pages and then fall asleep. All that goes to say is that this book has been with me for a while, and if I’m totally honest it’s been a bit of a comfort to me in my miserable self-pitying state.

Mission to Murder really is like a cute shaggy dog sleeping on the end of your bed (thanks to Roscoe for a rare still moment). As a cozy mystery or a book to read on the beach, it’s kind of perfect.

After being falsely accused of embezzlement and fired, Maggie returns to her home town in North Carolina to lick her wounds.  Penniless and all but unemployable, she finds herself waiting tables at her aunt’s pie shop, Pie in the Sky.

Then her former boss turns up at Pie in the Sky and tells her he knows who stole the money and has called a press conference in which he will name the real thief and clear her name. But after he turns up dead that very night she has gone from fry pan to fire and become the number one suspect in his murder.

With a little help from Ryan, a local newspaper reporter, she sets about clearing her name and finding the murderer.

Plum Deadly reminded me a lot of the Cats in Trouble mysteries by Leann Sweeney and the Coffee House mysteries by Cleo Coyle.  If I have a criticism it’s that some things were left unexplained and hanging. But it’s possible those things will be revisited in the next books in the series and for the most part I enjoyed this book.